Beginners' Technical Questions / Is there a new SetMoveSpeed?

03 Nov 2021, 03:41
I'm trying to get a character to run out of the room, but it turns out AGS doesn't recognize SetMoveSpeed anymore. Is there a modern equivalent?

EDIT: Nobody's answered this yet, so let me try to get a twofer in... in addition to that, why does animate have you set a loop number? The animation is the character extending his hand to shake, which needs to be done toward the player character. I want the loop played to be based on which direction the character is facing. How does that work?
#2

...simply by being in the forum and clicking on the logo at the top to go out to the main site on my way to the games page. It's still there on every non-forum page I visit, and it's running extremely slow.

Sorry if this is an inconsequential error, but I'm still a bit freaked out after having lost the forums for most of this past week!

EDIT: on top of that, I just tried to go into the forums again and got an access denied message. I was afraid the forums were down again, so I didn't bother to take down the message as I didn't think I'd be able to report it.
#3

25 Oct 2021, 01:43
Hi all. I've just published a game for ScreamJam on itch.io, made in ten days. I seem to have gotten everything working before the deadline, except one little problem with a character animation, but that's not why I'm here... The main problem is one really big game-crashing error that takes place every time an inventory item is used on another inventory item... and on very rare occasions, clicking randomly in the inventory box will crash it as well. I originally scripted it from scratch, but I have copypasted a template version of the inventory handler in and it's still crashing any time you use an item on another item. It doesn't make the game unwinnable... just annoying.

The crash error is this:

(This line corresponds to whatever line the item interaction is on, and changes depending on which item you use on which item... there's nothing wrong with any of them as far as I can tell).

I don't mind making the game code available to anyone, since I'm offering it for free anyway. Here's the source files (which includes the infodump for the error):
https://drive.google.com/file/d/1dKMRXhHRpv9RbKtRcb2ufWYcAW_WoVZN/view?usp=sharing

While you're checking that out, there are two more little issues I'm having which I haven't been able to solve yet, but are extremely minor in comparison...
-The "pointer" mouse mode keeps getting called even when I don't ask it to, particularly in the inventory screen. It should always be defaulting to Interact.
-In room 6, starting on code line 165 to the end, is the script for the climactic moment of the game. Thus, let me put this one in a spoiler tag:
[spoiler]A character starts running toward you, but gets shot before they can reach you. Not only does the character refuse to have their run animation play, but after they are shot, they keep having their 'getting shot' animation play as they glide back to their starting position.[/spoiler]
I've messed with that code over and over, including adding a bunch of superfluous LockView and StopMoving commands, but to no avail. I know the code in there now is wrong, and probably full of spaghett, but it's only that way because I've been finagling with it for so long.
EDIT: I also just remembered one more issue: In one scene that I'm definitely aware of (maybe more), Wait() doesn't seem to work, and the numerical parameter for FadeIn and FadeOut are also not doing anything... no matter how high I set them, FadeOut(), Wait(), and FadeIn() gives me a quick fade to black and then an immediate fade back in. This takes place in GlabalScript.asc lines 1689 to 1709.

Any assistance would be greatly appreciated!

23 Oct 2021, 22:58
Katherine O'Neill and her daughter Anna went missing in Willamette National Park near Salem, Oregon two weeks ago. As Ian James McDermott, you are lead investigator of ESPER,  a secret organization that helps stand in the gap between the darkness and the light, and right now, you may be the only one who can help...

...because you are the one they call The Occultist.

A point and click horror adventure made in Adventure Game Studio in ten days for Scream Jam 2021 on itch.io, this is the rebirth of an old series that went under the name E.S.P.E.R.. (by the way, for any of you who were around 20 years ago... I used to go by "esper" on these boards). Left click to interact, look, or move the Occultist. Right click changes interaction type between Walk To, Interact, and Examine. The bag in the bottom left corner opens your inventory, and the wrench and screwdriver in the bottom right opens the Settings panel.

All art and programming done by The Wandering Wizard Simon Kalimanus (ie. esper), sound effects from www.freesound.org, and music from https://freepd.com/.

Known bugs: One character moves slightly after they die. Right now, you cannot use one inventory item on another without a game crash, but it isn't necessary to do so. I also wasn't able to add a few of the scary elements I meant to toward the end of the game, and I haven't thoroughly playtested it yet, although BOTH endings are definitely achievable.

The game is essentially completed now, but I will be refining it a bit, and working on a number of sequels. If anyone is interested in helping, that would be spectacular!

Thanks for checking it out. You can get it here: https://dogandahalf.itch.io/the-occultist-old-growth 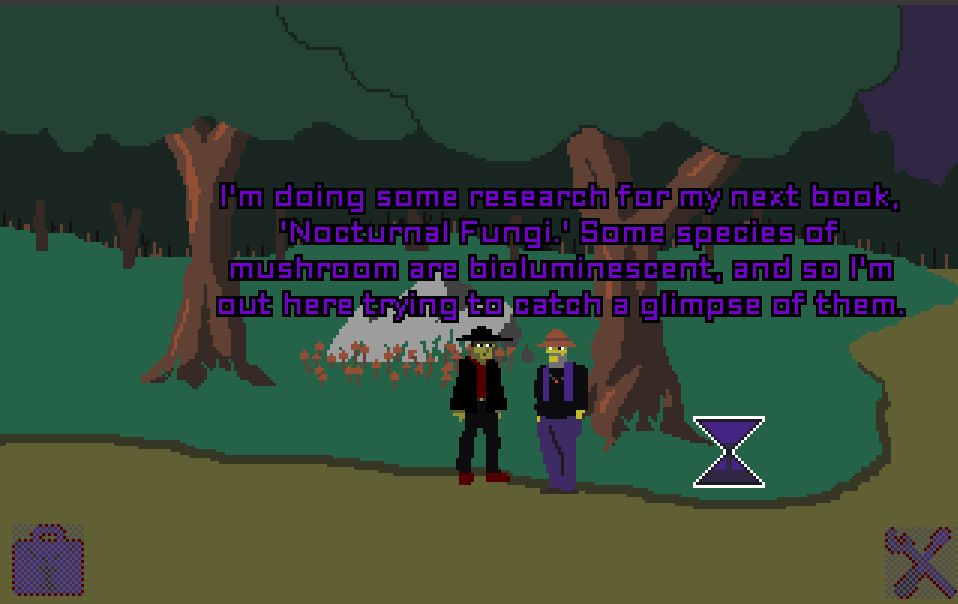 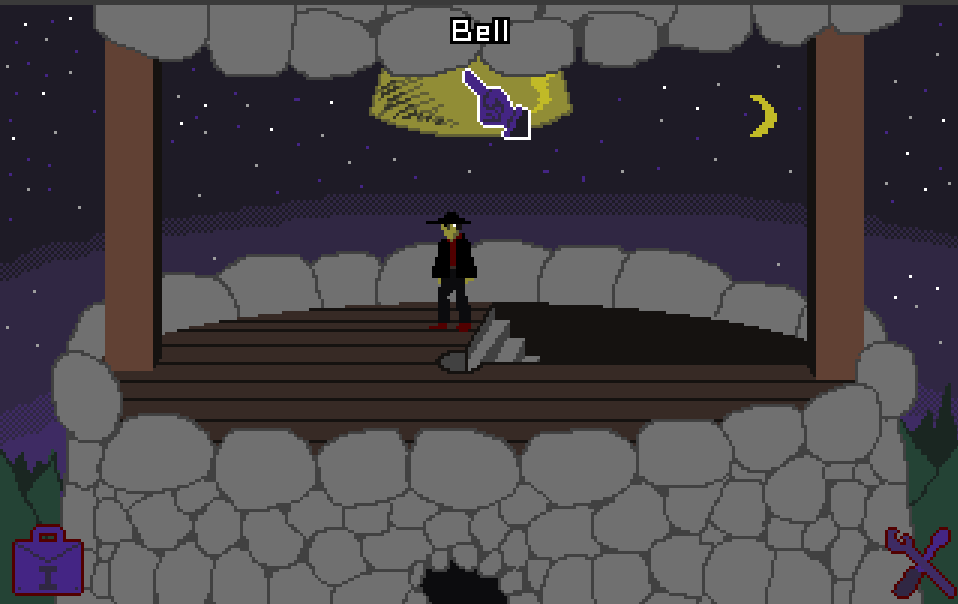 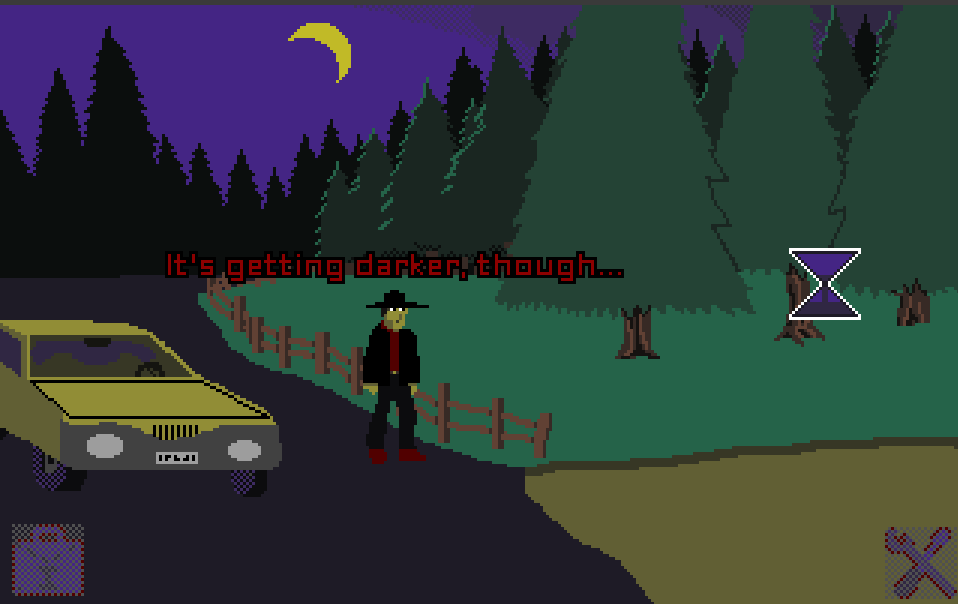 20 Oct 2021, 20:57
Hi all. I'm working on an AGS game for ScreamJam 2021 on itch.io, and I have three days left. Late into the game, I tried to change the font, and I guess I installed one AGS didn't like. Every time I try to run the game, it crashes. Unfortunately, now every time I try to open the font to change it, the editor also crashes. It's my "normal" font, so AGS won't let me delete it. Someone please help!


I apologize if something like this has already been posted, but every time I try to search the forums it says "You did that less than 5 seconds ago!" even though it was literally the first time I tried searching for something with this username.
Pages1
SMF spam blocked by CleanTalk

By continuing to use this site you agree to the use of cookies. Please visit this page to see exactly how we use these.