Ok, so you've never used IRC before, but want to get in on the act? Here's what we hope is a beginner's guide to what it is and how to join the AGS IRC community.

Basically, IRC consists of a number of text based internet chat rooms, where you can chat to other people from around the world.

First of all, I should mention that if you're behind a strict firewall or HTTP only proxy, you may not be able to use IRC. Check with your system administrator.

Now, download and install an IRC client. If you're using Windows, the obvious choice is mIRC.

Once installed, you'll get a dialog similar to the following: 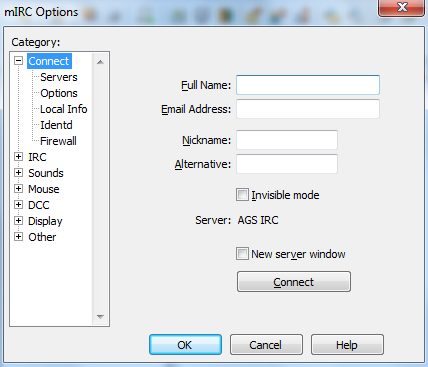 In the boxes, type the relevant information. You don't have to provide your real name or real email address, you can just put anything in. In the "Nickname" box, type the nickname that you want to be known by on IRC. This is a similar to having a posting name on the forum - you can be called whatever you like, but obviously it's worth using the same name you do on the forums, so people will know who you are!
There is also an "Alternative" box - here you can type a different nickname that will get used if someone else is already using yours.

Now, click on the "Servers" option in the left hand tree, then click the "Add" button. Type the information as shown below: 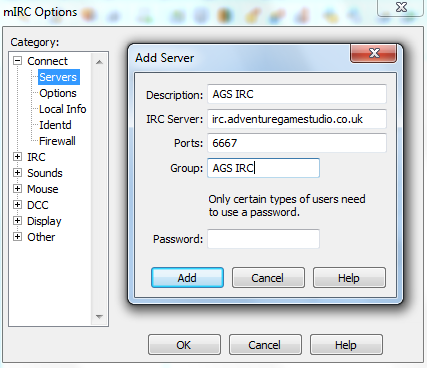 Click "Add" and the top window will close. Finally, click the big "Connect to Server" button and with luck you should be logged in and see a lot of messages scroll by.

Once the messages have stopped coming, you should have a flashing cursor at the bottom of the main mIRC window. In it, type:

You should then see the AGS channel window where you can type messages for all the other AGSers on IRC to see. On the right hand side of the mIRC window is a list of users currently online.

Have fun - some newbie questions & answers are listed below.

Please also scroll down this page and read the channel rules - what is and isn't allowed there. Ignorance of the rules is not an excuse for breaching them.

Q: Why have some people got a '@' symbol in the user list?
A: These people are channel operators. An operator (or 'op') is similar to a message board moderator - they have the power to kick and ban people from the channel, and to change the channel topic (displayed in the mIRC title bar).

Q: Who is Roger?
A: Roger is the AGS channel's bot. A bot is a computer program that pretends to be an IRC user. Roger's main job is to automatically grant Operator status to selected people as they enter the room and to kick anyone who is abusing the channel out.
He can also do some cool stuff like tell you the last time a user visited the channel (type "Roger, seen username"), and store facts.

You may see these abbreviations used frequently on IRC, and even on the forums. Here's what they mean:


These are just some of the most common abbreviations - a fuller list is available here.

The #AGS IRC channel is a chat channel dedicated to the discussion of the Adventure Game Studio application, games made with AGS, and adventure gaming in general.

1. Technical questions, however, should not be asked here. Any scripting issues that you have are better posted on the forums, where more users have more time to look over your question.

2. Off topic conversation on serious topics is welcome too. However, off-topic random rants and pointless rambles should be avoided. Although it can seem that the channel is dead at times, and that a random rant or argument will do no harm, it can prevent a more useful discussion from starting up.

3. Channel flooding is not permitted. Flooding is defined as sending many messages in a short period of time, with the effect of drowning out what is being said by other people. The exact determination of 'flooding' is at the channel ops' discretion; but note that repeatedly talking to the bots may be classed as flooding.

4. The channel is for AGS community members only (i.e. people who signed up on the forums and have an interest in adventure games). Any other people who randomly wander into the channel may be kicked or banned without warning.

5. Do not idle excessively. Anyone who sits on the channel but does not speak for 24 hours will be kicked. Also, if you are going away from your PC but leaving IRC logged in, it's common courtesy to add "|away" to your nick to let people know you're not around.

Any breach of the above rules will result in a warning from a channel op, and if the warning is not heeded then a ban of approximately one week will be instated. After that time, the user will be permitted to return, but if they breach the rules again, a permanent ban will be instated.

If you receive a ban, but feel it was unjust, take it up privately with the op who banned you. Do not whine about it on the forums or other IRC channels.

Only the Op who created the ban may remove it. If the Op who banned you has been absent from the channel for a significant time (over one week), then you may request that another Op review your case.

CHANNEL OPERATORS: Channel ops are regulars who have been there for a long period of time and are well trusted by others on the channel. Selection of new ops is made by appointment only and no requests for op status will be given.

Quick summary of the rules above

This site uses cookies to enhance user experience. Please visit this page to see how we use cookies.